The sound of Omnia processors and Axia Audio gear is literally heard round the world. Halfway across the globe from our Cleveland, Ohio, headquarters, it's making an impact in Sydney, Australia.

Even though licensed as a community radio station, Hope 103.2 puts a 50,000-watt ERP signal into Sydney. Its mission is to deliver a positive message of hope.

Reaching about 600,000 listeners each month, Hope 103.2 features an integrated music format, including lifestyle interviews and talk segments. The style is modern, lighthearted, and family-friendly with a focus on the community. Overseeing the engineering side of things at parent company Hope Media Ltd., is Technical Operations Manager Stephen Wilkinson. He's been with the company for 12 years.

There have been many technology changes at Hope 103.2 in that time, and the audio processing has evolved rather quickly. Just four years ago, they were using a competitor's processor. Wilkinson had already installed a lot of Telos gear, so he decided to give the Omnia.11 a try. “Right away, there was a big improvement in our sound.”

In June of this year, he decided to take his Omnia to the next level, by upgrading with the G-Force and the Perfect Declipper Optional Plug-Ins. “I follow the Telos posts on Facebook. I had a few conversations with developer Cornelius Gould, and met Mary Ann Seidler, Global Director of Processing Sales, at a conference in Sydney. After hearing what they had to say, I was keen to try it out myself.”

The upgrade to the new plug-ins was about as dramatic a change as going from the old processor to the Omnia.11. Wilkinson began his installation with the 'Glideslope' preset. Right away, he noticed the differences. “The stereo image enhancer is a big improvement, the separation is noticeably wider. The overall impression we get is that the sound is more dynamic and open.”

"The stereo image enhancer is a big improvement, the separation is noticeably wider. The overall impression we get is that the sound is more dynamic and open."

He adds, “The low bass 'Bottom End' is huge and subsonic. We actually had to dial it down a bit though, be 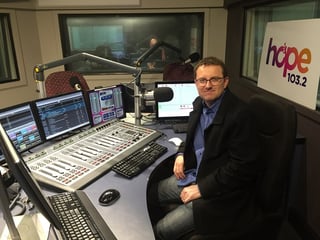 cause we were getting complaints from listeners about their car speakers rattling.”

One thing Wilkinson really noticed was the change when going between spoken word and music. “Before the plug-ins, we had to use a lot of AGC to keep voice at the same level as the music. Now we don't need that. And overall, it just seems louder right out of the box.”

He adds that the initial setup and adjustment seems much easier now. Wait a minute, added plug-ins, more features, how is that possible? It's all thanks to a brand-new dynamics processing framework that enables the Omnia.11 to set the overall EQ for signature consistency, making it sound cleaner, clearer, louder, more consistent, more open, and more pleasing. An example of simple setup is the new bass-management system allows users to adjust the Omnia.11's bass sub-system by turning just a single knob. The end result, you hear the music. You hear the voice. You don’t hear the processor.

Another reason Wilkinson chose the Omnia.11was for its multipath/SSB function. Multipath had been a problem for the Hope 103.2 signal, as Sydney has many hills and valleys. Omnia's Single Sideband Suppressed Carrier (SSBSC) technology can help reduce multipath distortion. “I do a 25-minute commute to work every day through Sydney,” adds Wilkinson. “I know where all of the bad spots are. Now they're either completely gone or greatly reduced.”

There was already quite a bit of Telos Alliance equipment at Hope 103.2 before the Omnia.11 arrived. As a long-time Telos geek, Wilkinson has set up the three on-air studios with Axia Element consoles, and three production rooms have Radius control surfaces installed. To bring all of the analog gear into the system, a number of Axia xNodes are employed.

Also found around the Hope studios are three Telos Z/IP ONE IP audio codecs, a 25-Seven Systems PDM Program Delay Manager, an Hx2 digital hybrid, and a Zephyr iPort PLUS Multi-Codec Gateway to encode streams. On the processor end, Hope 103.2 also has an Omnia.8, as well as an Omnia ONE at the transmitter site, which takes care of the backup audio path. Looking ahead to next year, Wilkinson has budgeted for a Telos VX VoIP Talkshow System.

For Wilkinson, going into broadcast engineering was a natural choic

e, probably because it was in his DNA. “My father worked for the Australian Broadcasting Corporation (ABC) in audio production. I developed a fascination with the subject early on. My earliest efforts at radio involved connecting a mixer to a wireless FM microphone, and broadcasting around the house.”

From these humble beginnings at age 15, he did volunteer work at his local 100-watt community station. “I learned about all aspects of radio, from on-air, production to technical.” He worked in radio production roles and completed a Post Graduate Degree in Design Science Audio at University. After a brief foray into cinema sound, Wilkinson returned to radio, working as a contractor for Hope Media, where he did a facility move. It must have gone well, because two years later he was offered a full-time position with the company.

Wilkinson was also one of the early adopters of Axia gear and AoIP in Australia. “I first became acquainted with Axia in 2006, and could see that it was the future. In 2007, I did a full refit of our studio facility as the third station in Australia to use Axia.”