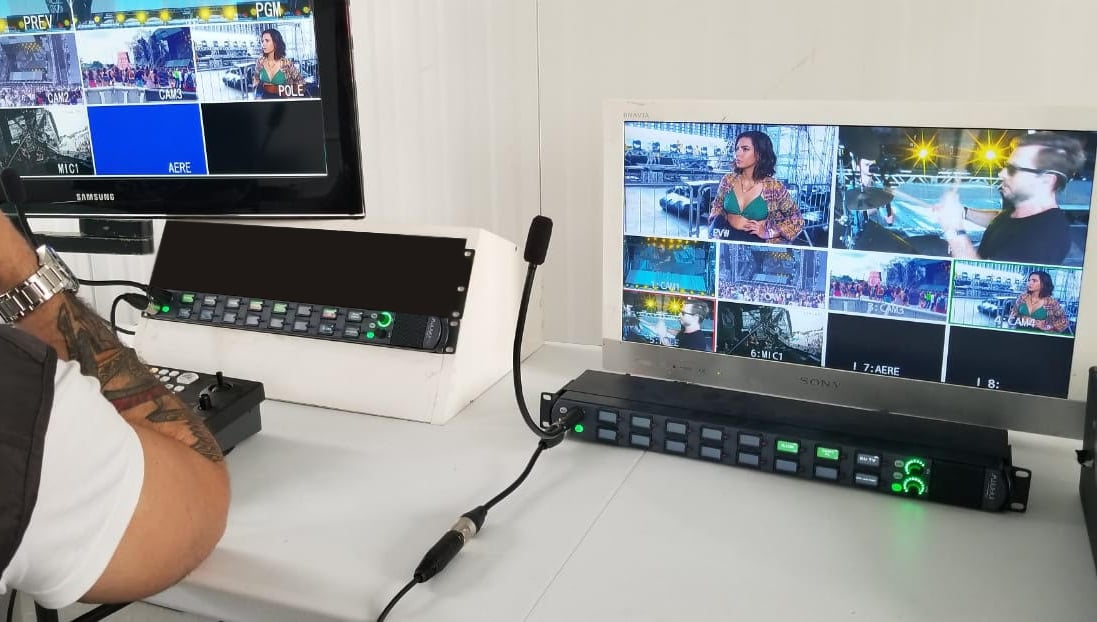 Globosat—a division of Rede Globo, the largest broadcaster in Latin America—had the need to tie all the stages and production center of Lollapalooza Brazil together, and turned to New York Digital to provide that expertise. Grammy and Emmy award-winning Director of New York Digital Danny Littwin worked closely with Globosat's lead engineer, Fabio Costa de Almeida, to specify the Telos Infinity matrix-free IP intercom system as the principal interface between various and disparate systems, pulling together communication sources from across the entire event into the Infinity ecosystem.

Danny chose Infinity for its matrix-free design, giving the event’s producers more flexibility to add expansion panels easily and on the fly while taking up less space in the truck.

“It was necessary to have something that would take up very little physical space and be able to be controlled remotely and changed instantaneously,” says Danny. “While matrix technology does let you make changes remotely, the fact is that you have to have a lot of physical space for its rack, plus all the peripherals. In the case of Infinity, we had only one rack unit worth of equipment, including a half-rack Axia xSwitch and a half-rack Telos Alliance Mixed Signal xNode. This was the only equipment that needed to stay in the van, everything else was remoted to other places.”

The Infinity system was set up with Partylines for both Lollapalooza’s on-air directors and producers, allowing them to communicate clearly and instantaneously with any one of the event’s stages. “Even in 120-degree heat inside the truck, there were absolutely no difficulties in communication, which speaks to the resiliency of the Infinity equipment,” says Danny.

Because Danny had to leave the concert for several days to attend the NAB Show, it was important that he be able to set up the system easily, then teach the chief and communications engineers how to use it quickly, trusting that they would be able to operate it in his absence. “I was able to teach them how to launch the Infinity Dashboard software, how to manipulate the system, and turn it on and off so they could use it without me being there,” says Danny.

In fact, one of the most common questions that arose as Danny was teaching the crew how to use the Infinity system was “How do I add an expansion panel?”

His answer: “You simply take a cable, plug it into the switch, plug it into the head, allow a few seconds for the new piece of equipment to be recognized, and you’re ready to go,” he says. “No need to add a card or expansion slot. To which they replied ‘That’s it? That’s easy!’ They were delighted.”

Small details like how Infinity panels are labeled, proved to be lifesavers for the team. “The color-coded switches are great because you can color the panels by groups,” says Danny. “We had a group for Director, Lighting, Stage, and Production, all with different colors. Additionally, the text labeling was very easy to read. We had two people with the name Rodrigo, and we never got them confused. Labeling is extremely important because the people using the system may not have a lot of technical aptitude and they need to make snap decisions and push buttons very quickly. You can program the buttons all from the Dashboard GUI, too, so it’s easy.”

Will he use the Infinity IP intercom system again?

“Absolutely, the fact is, installation is minimal. Being all IP-based, it’s very plug-and-play with none of the problems associated with matrix systems. That’s a very big plus!”

Hear What's Next in IP Audio Innovation at InfoComm 2019