Meet Marc Bakos. He's the man behind a recent update at kmfm (located in Kent, in South East England UK) to the newest audio processing solution from Telos Alliance, Omnia Enterprise 9s High-Density Virtual Audio Processing Software. We chat with him about how the software is working out for him and more.

Tell us about your set up, and your position at the station?

I'm an engineering consultant for kmfm in Kent, UK. kmfm is a regional commercial station owned by the KM Media Group in the South East of England with eight physical transmitters as part of their station network. kmfm runs an all-digital studio environment with a sophisticated and fully redundant audio processing network, delivered over a fibre IP WAN from their studios in Medway, to all transmitter sites across the county [Kent].

We process all digital audio on a clustered, high-

availability, server environment using the most cutting-edge software supplied by Telos Alliance (9s); where the audio is then encoded and delivered to multiple locations: all transmitters across the county (uncompressed), encoded for online and to DAB (the European version of HD Radio). At the transmitter sites, the decoded audio is then finalized to MPX to directly feed the corresponding transmitter hardware. It’s brilliant, perfectly timed and injected with RDS information, sounding outstandingly loud and clear!

Why did you choose Telos Alliance and 9s?

I chose Telos Alliance for this rollout because of the forward-thinking nature of the company. Telos Alliance knows the broadcast business inside out and caters for it well, from engineering talent, to remote support, and even its worldwide partners. When it comes to equipment, everything from the console in the studio, right down to the IP audio drivers...everything just works, sounds amazing and most importantly,  it is rock solid. I’ve followed the Omnia product range of audio processors for a number of years — it has always been a cut above the rest and was a quick and easy decision on what to implement for this processing project.

How does 9s help you to create your broadcast and what features do you utilize on the product daily?

I worked closely with Telos Alliance, its developers, as well as our partner here in the UK (Broadcast Bionics) to push the boundaries of what is now possible to do in software. Audio processing has evolved from a dedicated hardware unit with specifically designed FPGA and DSP circuits, to a real-time software service that can run on already proven server hardware; which means better reliability as well as diversity of implementation methods. Utilizing the Livewire nature of the system; tied together with Pathfinder Core PRO, this has enabled us to do better handling of routing with even more feedback and granular control.

Were there any challenges with the installation? If so how did you overcome them?

Quite honestly, yes and no. Yes, only because we had to wait – as the product we wanted didn’t exist at first! My initial discussions with the product managers and developers at Telos as well as our UK partner helped scope out a new product for exactly what we needed. We run a network of transmitters which each get delivered local advertisement breaks. This was the key for us, having a product which not only delivered the studio output to each site – but could also sum together local ad play out too. We knew what we needed; unique in a sense, but I knew this would be something stations would be utilizing in the future as advertising becomes more targeted; even for FM. I knew that I didn't want a lot of boxes; especially if what they were doing could just be done in software. With my background knowledge I already have in IT and networking, forging a cluster to run software to deliver perfectly processed audio that can be encoded directly to each of our transmitters and at the same time, online...was an absolute no brainer! 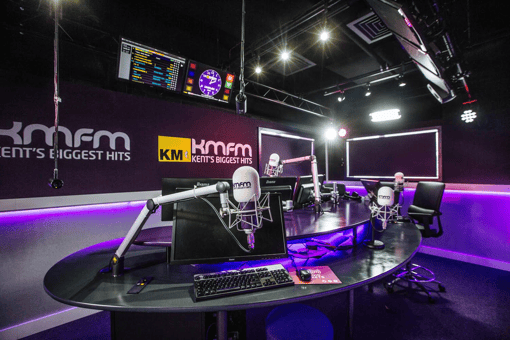 Any plans to expand?

Without giving much away, kmfm has plans to expand its in-house workflow with continued upgrades and additional studios. Nothing is ever finished; it’s just always evolving!

Did you have any interaction with support?

Oh yes, absolutely! As well as the new processing environment, but also with the other bits of Telos Alliance kit we already have -- such as the Axia Fusion consoles, Pathfinder, etc. Every time I have called or emailed support, it has always been a pleasure to work with the team all around the world. First-class service and great attention to detail and customer service.

Has having 9s allowed you to do anything new that you couldn't do before?

The new processing network has certainly allowed us to become more efficient, streamlined and better ‘on the dial’ (they call that competitive, right?). kmfm has been able to do more with less; clearing racks of equipment that was otherwise taking up space, complexity and power.

The new processing network has certainly allowed us to become more efficient, streamlined and better ‘on the dial’ (they call that competitive, right?).—Marc Bakos, kmfm

Can you give us an example of a recent live broadcast you used 9s on? What are the details of that project?

Well, if you are ever in Kent in the UK, you can find kmfm on the dial, on DAB or online. The team I work with at kmfm are incredibly fantastic — and my thanks go out to Rob Wills (programme controller/station manager) who has trusted in the work I do; and also David Butler (group IT manager) who has also supported the direction I have advised and consequently actioned at KM Media Group. I’d also like to personally thank Phil Bignell and Kirsten Smith at Broadcast Bionics for their support; as well as Mary Ann Seidler and Leif Claesson from Telos Alliance for making this solution become a reality. If you have any questions, Telos Alliance or any worldwide partner can point  you in the right direction. If you have any questions for me, I'd love to hear from you: marc@bakos.london

Is there anything Omnia Enterprise 9s has allowed you to do, or a way that you are using it, or a way that it has been especially helpful/essential during the ongoing COVID-19 isolation?

I would say that during this time the item that has been incredibly helpful and rock-solid for us has been the remote access. If there has been anything we've wanted to check up; or in one case confirming some metadata, the nfRemote tool has been invaluable.
Further reading: