5 Advantages of Switching to a Broadcast VoIP Phone System

We live in an increasingly digital and largely networked world. It’s no accident that AoIP is taking radio and TV by storm: the economies of scale, ease of use, and return on investment are undeniable. Traditional POTS and ISDN phone services are steadily being supplanted by SIP- and VoIP-based methods at the service-provider level. ISDN is already unavailable for many new installations, and POTS is moving that way now. A SIP/VoIP phone system offers digital phone services that cost less, sound better, and are more easily managed than traditional services. 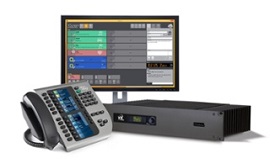 Ever since broadcasters started placing phone callers on-air, engineers have been wrestling with phone systems in broadcast studios. For decades, we’ve been wiring individual phone lines to single-, dual-, or multiline phone hybrids and line selection controllers in our control rooms and production rooms. It’s tedious, labor-intensive, delivers quality inferior to all-digital phone solutions, and—with regard to actual “landline” phone circuits—is actually quite expensive on an ongoing basis when compared to modern alternatives. Now, the nature of phone line delivery and connection is changing. Instead of individual POTS or ISDN BRI lines, our phone connectivity is being delivered as ISDN PRI, T1/E1, and most importantly, by SIP/VoIP over Ethernet. These bulk connections can easily bring 20 or more phone “lines” to us over a single cable. These single-cable connections suggest that, rather than break out lines and wire a few of them to individual studios, we’re much better served by a broadcast phone system that handles all these lines together. Such a system lets us assign lines to studios easily, with a simple browser interface, without fussy wiring or awkward phone line patching systems.

Consider, also, that most broadcast facilities are consolidated. It’s getting rare that a multiline talkshow system is going into a building with only one studio. Nowadays we have 2, 4, 6, and up to 12 or even more studios under one roof. That’s a lot of wiring if you’re running individual phone lines to each studio! A talkshow system that serves multiple studios, perhaps with existing studio wiring, makes much more sense.

From several different perspectives, it is clear that moving to SIP/VoIP as a telco connection technology is inevitable, and also beneficial to the bottom line. VoIP is used by nearly all Fortune 500 companies. When engineered with some thought to bandwidth and QoS, it is as reliable as traditional technologies, while costing less and sounding better.

Want to learn more about how your broadcast phone system can pay for itself over the course of 1-2 years? Download our eBook, "Broadcast VoIP Telephone ROI."