What would become known as the Omnia signature sound was born when Frank Foti created a customized audio processing chain—something sought by broadcasters around the world—for New York's legendary Z-100 WHTZ. About the same time, at WMMS Cleveland, the just as legendary rock giant known as “The Home of the Buzzard,” Steve Church was mastering the art of a new technology known as digital signal processing, or DSP, as he developed the Telos 10 telephone hybrid. Steve was the first to introduce DSP into radio broadcasting, thus launching the career of disruptive innovations for which he became known.

With persistence and a never-give-up attitude, success ev 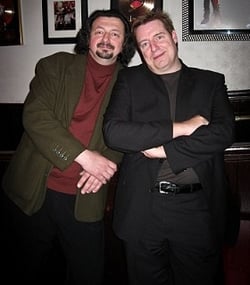 entually came. Both quit their day jobs in radio to start their own companies: Steve founding Telos Systems in 1985, Frank launching Cutting Edge Technologies in 1988. Shortly thereafter, they joined forces, when Cutting Edge merged with Telos.

DSP was a game changer for telephone hybrids. The new technology could do things not possible with analog circuits and conventional filters, so Steve and Frank decided to focus their energies on applying DSP technology to audio processing. Early DSP audio processors of the late 1980s lacked the clarity, warmth, and competitive loudness of the best analog processors of the time. Some analog advocates went so far as to say it was impossible for a DSP box to sound as good as an analog processor. But impossible was not a word in either Steve or Frank's vocabulary, and they were out to prove the critics wrong.

As the duo evaluated existing DSP devices, they arrived at a moment when the theory and practice of electronics parted company. Frank explains, “The math worked out and the circuit designs were perfect. Sine wave tests yielded near flawless results. Yet when music was applied, the sound was horrific.” So what happened?

Frank says Steve was the first to figure it out. “What had been called 'grunge' was, in more technical terms, aliasing distortion. A second problem was the clipper systems of existing DSP processors. The final limiters simply did not possess enough digital bandwidth to suppress aliasing components in an inaudible way. Hence the term digital grunge.” Steve and Frank realized that overcoming aliasing distortion was the critical hurdle to creating a great-sounding DSP-based audio processor, and the hard work was about to begin.

Much of the magic of DSP lies in its ability to create clever algorithms to solve a problem. Now that the problem was understood, finding a killer algorithm proved elusive. There were countless late-night discussions, diagrams of algorithms drawn on napkins, and prototype designs.

Finally, around 1995-96, Frank created a family of algorithms for AGC, dynamic limiting, clipping, and distortion management, all of which performed without aliasing. Next, they needed to find the firmware to run it on. As it turned out, the DSP platform developed for the Telos Zephyr was a good fit, so the next step was to build a prototype and see how it worked in the real world.

With a prototype processor packed in a flight case, Frank began making the rounds of top-rated stations in the U.S. and Europe. Test sites ranged from one of the largest state broadcasters in Europe to hot rockin', flame throwin', fire breathin' stations in the States. But no matter where Frank went, the response was enthusiastic.

With a prototype processor packed in a flight case, Frank began making the rounds of top-rated stations in the U.S. and Europe. Test sites ranged from one of the largest state broadcasters in Europe to hot rockin', flame throwin', fire breathin' stations in the States. But no matter where Frank went, the response was enthusiastic.

In fact, one station practically took Frank hostage and wouldn't let him leave with the processor. He patiently explained that this was the one and only box, and he needed it to make more. The staff finally relented, but not before Frank promised to send them one of the first units.

The longest part of the journey was at an end. Frank had encapsulated the sound he was looking for, one he created with analog electronics, and ported it over into the digital domain. The result was a new generation of audio processors where the sound was rich, full, open, bright, and tight. It was also competitively loud, all without the digital grunge that had tormented earlier DSP processors. With the concept proven in real-world field tests, the next step was to go to production and go out and sell it. But there was one more hurdle before that could happen—coming up with a name for this awesome new device.

Omnia was not the first choice. Before that came Vito, named after one of Frank's legendary cats, Vito Corleone. Then there was Lava, Athena, Stealth, Black Box, and a host of others. Nothing sounded quite right. An amazing box such as this needed an appropriately impressive name, so the duo sought inspiration from translation books, a thesaurus, and music and poetry encyclopedias. When that failed, they tried adult beverages to stimulate their creative juices. Still, they came up empty. It was a freelance artist who came up with Omnia, Latin for of all. Bingo.

Omnia.fm was finally launched in the spring of 1997 at the AES Convention in Munich. A few weeks later, it made its debut at NAB '97, where it won both the Radio World Cool Stuff Award, and the BE Radio Pick Hit Award. From concept to creation, the journey lasted about nine years.

What began as a revolutionary FM audio processor has since evolved into a family of devices for the processing needs of FM, AM, and streaming audio. But Frank Foti and Omnia are not ones to rest on laurels. Innovate. Disrupt. Repeat. This is the mantra that guides the Omnia team that, after breaking new ground all those years ago, continues to push the bar. Aside from being the first to design and offer alias free processing, Omnia has also led the charge with software-based processing, single sideband suppressed carrier for FM Stereo, embedded pilot—yielding 1dB of added loudness legally, digital MPX connectivity via AES, µMPX over IP, the first broadcast processor with 48KHz audio sampling rate, updated clipping methods that reduce harmonic and intermodulation distortion to extremely low audibility, and the list goes on.

We’re on the threshold of cloud-based processing, and this is something Omnia is pioneering. I can soon see the day where an unprocessed signal will leave a content playout system, venture out into the ether, and along the way, audio processing will be applied ‘auto-magically.’ —Fr

And we've got another major product announcement coming your way soon!

Frank emphasizes “Today, a broadcast is much wider-ranging than the use of electromagnetic waves over-the-air. We process for every type of medium,” Frank adds. "Where processing resides is where the future is: We’re on the threshold of cloud-based processing, and this is something Omnia is pioneering. I can soon see the day where an unprocessed signal will leave a content playout system, venture out into the ether, and along the way, audio processing will be applied ‘auto-magically.’"

"When you consider the ongoing efforts of Omnia algorithm developers Corny Gould, Leif Claesson, Hans van Zutphen, and myself,” Frank says, “there’s always something brewing. My own efforts have been yielding some nice brainwave activity with regards to processing, and I know my brothers in dynamics are just as active. The most I can share, as of now, is my own continued efforts into distortion management, and in some cases elimination. More to come on that topic in the future.”

We can be sure Frank and Omnia will be there, leading the way to the future for the next 20, and onward.

Here's to many more years of Disruptive Innovation.

Review a few of the thousands of instances of happy Omnia users with this sample of blog posts.

Bringin' the Funk (to Germany) with Omnia Audio