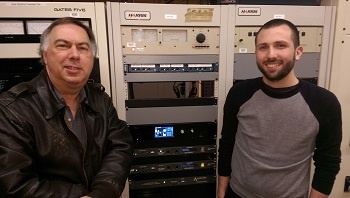 We go to the far reaches of the globe to bring you stories about happy users of Telos Alliance equipment, along with the innovative ways they put it to use. But sometimes, a great story is right in our own back yard. This time, we'll take a short drive from our Cleveland headquarters and travel to legacy station WHK 1420 AM The Answer. It's now part of the Salem Media Group. The Cleveland cluster also includes WHKW 1220 The Word, WHKZ 1440 The Word, and WFHM 95.5 FM The Fish. When we get there, we'll meet up with Chief Engineer Brett Patram. He'll tell us about his experiences with Telos, and how the stations came to be a test site for Omnia processors, most recently the Omnia.7AM.

When Brett took over the operation in 2009, the audio processing situation was not good. All four stations were using a competitor's equipment. “The processors dated from the 1990s,” explains Brett. “Our parent company was expanding back then and made company-wide purchases for various types of equipment, including processors. These units had first-generation DSP technology. They worked OK, but didn't sound very good.”

The transition began with a chance encounter at an SBE meeting. “Telos has been a great supporter of the local SBE Chapter 70. They occasionally host meetings at their headquarters. After NAB, Frank (Foti) and Corny (Cornelius Gould) give a recap of the show.” Following discussions with Frank and Corny, plans began to take shape.

Brett's beta testing days began when he got an Omnia.11 to evaluate. He started doing Single Sideband tests with it on WFHM. Later, he did about two and half years of G-Force testing. The tests help put Brett's stations on the cutting edge of processing technology, but they also benefited Telos and Omnia, as developer Cornelius Gould explains. “The broadcasters in our back yard have been valuable in getting first impressions and feedback about our ideas before setting out into the larger world. It is also nice to be able to observe how algorithms and hardware perform under real world conditions.”

Later, Brett was approached by Omnia Marketing Manager Denny Sanders at another SBE meeting. “He wondered if we might want to test the new Omnia.7AM. We decided the best place to do the evaluation was on WHK. It had historical ties with Telos, since founder Steve Church had been chief engineer at one time, and it had a typical AM format. We were also getting ready to install a Nautel 5 Kw transmitter, so it seemed fitting to change the processing at the same time.”

The format of WHK is typical of many stations, but also indicative of why designing an AM processor that works well can be so challenging. Brett continues, “WHK's format is news-talk-Christian. Most of the weekday programming comes from the Salem Radio Network, but a typical day can contain many different program sourc 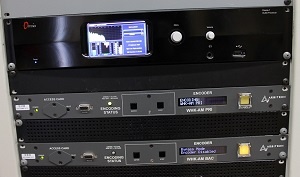 es from local studio to satellite to IP codecs. There are also lots of sports remotes.”

Omnia.7AM has many features designed for this type of real-world AM radio. Our exclusive 'Undo' technology removes distortion and mathematically recreates all of those peaks sliced from today’s poorly mastered contemporary music. By repairing this damaged audio before processing, 'Undo' gives the 7AM cleaner and more dynamic audio to work with.

The Dry Voice Detector is another great feature. Even 7AM’s psychoacoustically controlled distortion-masking clipper, which dramatically minimizes the dreaded “clean / loud” tradeoff, can reveal some distortion on voices when overall loudness is the goal. To ensure best quality, the Dry Voice Detector listens for speech, then automatically and inaudibly adjusts the compressor and limiter sections, reducing the amount of overall clipping needed to maintain the same level of loudness.

While a well-calibrated set of ears is essential to tuning up any processor, it's also important to be able to visualize what you are doing. Traditionally, an oscilloscope, spectrum analyzer, and occasionally real-time analyzer were used. Good news. These and many more devices come as software implementations in Omnia.7AM. Not only that, buy you also have the ability to visually monitor the signal at the input, the output, and dozens of in-between points throughout the processing path, so you can tell what’s happening to your audio every step of the way.

Brett's processing goals were to have a dense, loud and consistent sound for WHK. He began by evaluating several of Ted Alexander's presets for the 7AM, and eventually settled on 'All News Aggressive.' From that jumping-off point, he made a few tweaks to arrive at the sound he liked.

After choosing the right preset, he spent some time tuning the Psychoacoustically Controlled Distortion-Masking Clipper. “It allows you to get very dense modulation without listener fatigue. It's almost too loud for human consumption, since distortion with this type of loudness isn't a problem anymore,” adds Brett.

WHK's transition to the new transmitter and 7AM was breathtaking. Brett describes it as 'an audio facelift for the station.' “Right away, we received inquiries from other broadcasters in the market wondering what we had done.”

“Right away, we received inquiries from other broadcasters in the market wondering what we had done.”

Brett is no stranger to Axia gear. Before the Omnias arrived, he had built seven studios for the Cleveland cluster, six with Axia iQ control surfaces and QOR.32 Integrated Console Engines. These, combined with the Pathfinder Routing Control provide an incredible amount of flexibility. “We have the ability to put any of the four stations on the air from any of the seven studios. It's greatly simplified life for our operating staff.” 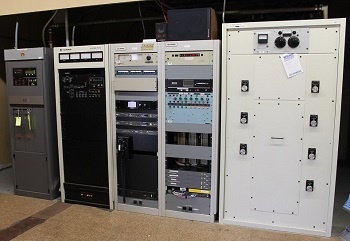 at the Republican National Convention in July. “We had five booths on radio row, and supported both our local hosts and talent from other Salem programs.” To do that, Brett used several DESQ and RAQ consoles along with QOR Engines.

Brett began his tenure in Cleveland eight years ago, at age 20. He is unusual among younger engineers in that he is as comfortable working with high-power transmitters and tuning up an AM DA as he is setting up a Livewire+ network. He attributes much of that to having a good mentor. “I worked with then chief engineer Dave Johnson, who had about 50 years of experience. He taught me everything he knew, and I became a sponge and soaked it all up.” Now, at age 28, he handles the entire Cleveland operation singlehandedly.

WHK has been running with the Omnia.7AM for over a year now, and Brett couldn't be happier. “With all the advances in processing technology over the past few years, you think that it's reached a point where it just can't sound any better—but it does. The 7AM is well worth the money.”

If you'd like to read more about AM processing, or Omnia Audio processors in the field, check out these blog posts:

Get the Sound You Want: A Programmer's Guide to Processing

Omnia on the Riviera