Sean Martin is Managing Director at Talk Productions, a UK company behind WTOR HD (Torbay’s Big T), an online station that's been operating for several years with thousands of listeners tuning in each week.

It's a small company with a largely volunteer staff, but with big plans for the future; they're currently in the process of applying for Community FM and DAB licenses for the city of Torbay (hence the name 'Torbay's Big T') in Southwest England. Torbay currently has no station, so Talk Productions would fill that void, and as a community station, would offer their studios to community groups that would not normally have access to broadcast facilities. Sean says Talk Productions would also like to one day establish a school of radio in Southwest England.

So who does Sean rely on for his broadcast audio gear? Sean drops a few hints...

"We have the Axia iQ, the QOR.32, and Z/IPStream 9X/2 Streaming software, with an Omnia 9 FM+HD processor and a Telos VX Broadcast VoIP Telephone System next on our shopping list," he says. In addition, the Torbay facility is already a fully Livewire+ AES67-enabled studio. 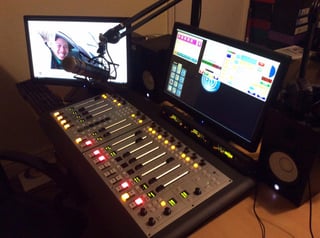 Sean is a big supporter of Telos Alliance radio gear across our multiple brands. “It’s great stuff," he adds. "We spent a lot of time looking at equipment a couple years back and I was pointed toward you guys, had a look at it and just loved Livewire. It’s a phenomenal way of doing stuff.” Since then it's been a no-brainer for Sean anytime funding comes along for Talk Productions to purchase equipment. “We made a conscious decision to go completely Telos Alliance."

Sean says one primary reason for Talk Productions' preference for Telos Alliance is how easily it integrates with that of other manufacturers, which has made things much easier than what Sean was used to previously in his radio career. "Livewire+ AES67 has made things so much simpler. It’s just a matter of pushing a couple of buttons and there it is, unlike the old days when it would take hours of patching studios." Sean says everything in the Talk Productions facility is over Livewire but the microphones. "It’s made life so much easier," he adds.

But Sean says it's more than just the quality of the equipment and ease of use. One of the things that encouraged him to buy from the Telos Alliance is the reliability of our Support team, always at the ready and responsive when Sean's team has been in need of technical assistance. "Telos Alliance Support is second to none. I can put a request in and your guys are right on it. I’ve made silly mistakes where I’ve been looking at the screens and obviously clicked on something, not realizing it, and your guys have phoned me up saying they’ve logged in remotely and fixed it in like two seconds.”

"Telos Alliance Support is second to none. I can put a request in and your guys are right on it. I've made silly mistakes... and your guys have phoned me up saying they've logged in remotely and fixed it in like two seconds.” 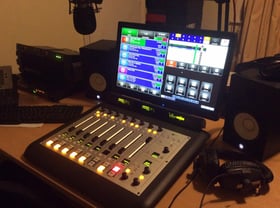 Importantly, when the issue has been more urgent, Sean points out, the result has been the same. "We had an issue with one of the latest Livewire drivers which caused complete chaos, but it was no trouble for the Telos Support team to take care of. They remotely logged in, took a look, and tweaked a few things and it wasn't long before we received an email indicating they'd sorted it out and we were good to go."

“I certainly won’t be going anywhere else when it comes to equipment," Sean adds enthusiastically. "Our wish list is growing.”

If you'd like to read more rave reviews of the Telos Alliance Support team, check out these blog posts: