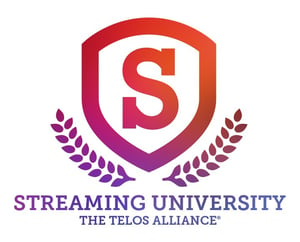 Kirk Harnack, host of the Streaming University video series, explains that this important resource was set up to allow broadcasters the option to watch only the videos covering what they need to know whenever it’s convenient for them, based on where they are with their streaming operation, or what topics they might require more information on.

“We divided Streaming University into 14 chapters so people who need to know the information there can pick and choose where they need to go,” says Kirk. “It’s not an hour-and-a-half webinar that you have to absorb all in one chunk. If you already know any one of these topics, you can skip those chapters, but if you need to know a specific topic a little better, you can watch that particular chapter only.”

This is a key aspect of Streaming University - the content covers a range of topics for everyone from those just getting started with streaming to those who have been streaming for years. There are still many broadcasters who aren’t streaming, while others are using advanced processing and encoding gear to provide the best possible audio for their streams.

Kirk notes that for those stations that are not yet streaming, right now is the perfect time to start. “It’s never been easier to get high quality audio out of your automation system or intercept the audio that is otherwise bound for your station’s on-air processor, and feed that audio into a PC running streaming software, or a hardware appliance dedicated to streaming audio.”

While a little over half of all U.S. radio stations are streaming, how good those streams sound, how easy they are to find, and what the listener experience is can be quite variable from one station to another. “This is where the challenge comes in for stations that are already streaming,” Kirk says. “The key question that station owners, managers, programmers, and engineers need to ask themselves is ‘How good is it?’ You may be streaming online, but what does it sound like compared to your competitors? With modern audio processing equipment, and using a modern audio codec, even at reasonable bit rates, a radio station’s stream should sound as good as their over-the-air experience… Sometimes even better.”

"The key question that station owners, managers, programmers, and engineers need to ask themselves is ‘How good is it?’"

Once an audio stream is up and running, a radio station can distribute their streams themselves, or contract with a content distribution network (CDN) to distribute their audio, the cost of which is typically well under $100 per month. For many small to medium market stations, this is about all it takes to make your streams available to as many people as you might expect to listen. Broadcasters can then publish the link to the audio stream that the CDN provides to their radio station’s website, as well as on various listing services that will list your station as broadcasting on the internet.

One reason streaming audio is so important is revenue. The predictions are that by 2020, man

y radio stations will be getting about 25-27% of their revenue from streaming. However the model that works best for generating revenue through streaming audio isn’t quite clear yet.

Several options exist. For example, some stations do an add-on to their over-the-air advertising and include spots on the stream, while other stations increase their overall spot rates because everything gets included. Still other radio stations sell banner ads on a streaming app, while a handful of other stations have developed additional streams—audio channels that they can’t do over the air—often for niche programming such as high school sports, local government news, or local arts programming. This way, they’re able to sell this extra content to generate additional streaming revenues. Some stations use a mix of these methods to see what works best for them in an effort to maximize revenues from streaming.

“Radio stations have the technology, they have the name recognition, and they have the sales staff," Kirk points out. "They have all these key ingredients to make non-traditional revenue through streaming audio.”

There’s a lot to know when it comes to streaming, and these concerns are just some of the topics covered by Streaming University. “It’s nearly impossible for any one engineer or broadcaster to know all there is to know about internet streaming,” Kirk emphasizes. “The good news is, you can learn it in bite-size pieces, from beginning to end. Not only what it takes technically, what some of the best practices are, and what the legal ramifications are such as licensing, but also some important - if a bit opinionated - advice with regard to how to right size your streaming operation so you can get the maximum bang for your buck from your Content Distribution Network.”

And the response to Streaming University? “The feedback we’re getting is just terrific. The engineers,  program directors, and station owners are telling me they absolutely love this resource—that it has opened their eyes—not only to all of the facets of streaming and little bits of complexity that exist, but it has helped them to make it as simple as can be, so they can be on the internet, streaming worldwide. People have contacted me thanking Telos for making Streaming University available. It’s that helpful, and it’s that meaningful to broadcasters.” 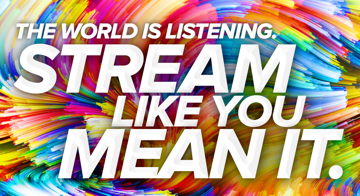 The Telos Alliance uses the slogan “Stream like you mean it.” The idea behind this is that the approach should be no different for streaming audio than it is for a terrestrial broadcast signal. “Broadcasters tend to buy the best audio processor they can afford,” Kirk insists. “They try to get a reliable transmitter, and a reliable studio-to-transmitter link. Why? Because they need to serve their communities in such a way that they sound great and their stations are reliable. The public expects that.”

So why not treat your audio stream the same way?

“The public expects the same thing from an internet stream; it needs to sound great, and it needs to be reliable. The good news is, with streaming, the cost to do it right is far less than the cost of traditional over-the-air transmission, so it’s essential to use the right gear. Then—and only then—will you be streaming like you mean it.”

For additional insight into Streaming Audio, check out these blog posts:

All About Adaptive Audio Streaming

Hardware Versus Software Streaming: Which Is Right for Your Facility?

The Stream Locomotive is leaving the station. Don't get left behind.

Streaming: Then and Now

Deja Vu All Over Again: Paralleling Streaming with the Growth of FM